Santa isn't coming to town...or "The Year Without a Killer Santa Claus"

Oh, if only Tri-Star hadn't purchased commercial time during a Packer game...

On a fall Sunday afternoon in 1984, thirty-two year old Milwaukee housewife Kathleen Eberhardt was watching the game from Green Bay's Lambeau Field with her family, including her two children aged 5 and 2, when the following commercial appeared during a break in the game...


And so began the grass roots campaign against Silent Night, Deadly Night - historic for one very important reason: it worked. In the last quarter-century, other movies have met with tremendous controversy, either through their advertising or content. SNDN gave offense on

both levels, resulting in the commercials being pulled after only one week of airing and, more shockingly, Tri-Star canceling its plans for a gradual nationwide rollout that would have the movie in theaters until Christmastime. Mere days after Election '84, when Ronald Reagan was re-elected over Walter Mondale in a 49 state landslide, the conservative winds sweeping the nation swept SNDN out of cinemas, onto VHS, and into the martyrdom of Christmas cult status.

After seeing the ad on Sunday, November 4, Eberhardt moved quickly. Claiming she was scandalized and her children were traumatized by the sight of an axe-wielding Santa, she contacted her 23 year old friend Karen Knowles and, around Eberhardt's kitchen table, the pair concocted Citizens Against Movie Madness (CAMM - and no, that acronym doesn't mean anything to me, either). They contacted friends and asked them to protest the airing of the commercial, lodging their complaints both with local affiliates and Tri-Star Pictures.

As it turns out, they weren't alone in this regard. The commercial aired in the Midwest and the Northeast, and was ostensibly only to play in late-night slots. However, due to some error, it wound up in Sunday afternoon rotation and early evening play on many affiliates. Switchboards glowed redder than Rudolph's nose, and within days, Tri-Star announced its decision to pull the ads after the first week - although, given the limited budget for the film, it may well be that the studio didn't intend to run the spots much longer in the limited release area.

But Eberhardt and Knowles didn't stop there. Their true intent was to get the movie pulled from cinemas entirely, and, after learning that SNDN would open November 9 on three Milwaukee screens owned by the Marcus Corporation, they contacted the company's then-Executive Vice President Bruce Olson and asked him to voluntarily pull the movie prior to its scheduled release, or they would mount a picketing campaign. Olson advised the pair to suspend their protest, noting that the history of these acts only serves to 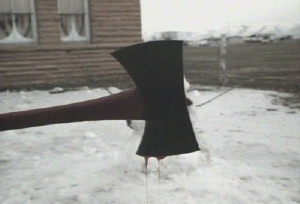 increase interest and attendance for such material. Undaunted, the pair continued with their plans (even getting Hollywood legend Mickey Rooney to lend his name to the cause), and, in that pre-Internet era when information had to travel through relatively primitive channels, had aroused enough interest through local affiliates that they caught the attention of Dan Rather and the CBS Evening News, who closed the broadcast on Friday, November 9 - the movie's opening day - with a story about the Milwaukee-based protest. Similar demonstrations were occurring in other cities opening the movie, but it was clear that Wisconsin's biggest city was Ground Zero, attracting a colorful collection of the outraged and indignant (including two nuns who dressed as Mr. and Mrs. Claus and claimed they came all the way from the North Pole to voice their displeasure).

Soon America's most influential film critics - Gene Siskel and Roger Ebert - noted the protests in the "X-Ray" segment of their weekly review show, but their high dudgeon was a day late and a dollar short, as events were already several steps ahead of the pair...

By Monday morning, part of Olson's warning proved prophetic. After opening on a mere 398 screens, the movie grossed a surprisingly robust $1.4 million, a remarkable sum for a regional release, and a substantial return on Tri-Star's meager initial investment. Clearly, if the movie continued to platform across the South and West - and continued to inspire protests - the studio would be ruing the controversy all the way to the bank.

But that's when the surprise occurred. Tri-Star stunned just about everyone by announcing that the movie would be pulled from theaters after only one week - permanently. Even though the protests were mild (when they existed at all - many theater managers reported that the movie played without incident - and in some cases, without audiences), the studio got cold feet, and their Christmas movie never even made it to Thanksgiving. The movie's producer, Ira Barmak, apologized for the upset feelings, saying that the animosity toward the picture was generated by a mistaken ad campaign that should never have aired during family viewing time (many newspapers also refused to run the iconic "Santa Down the Chimney with an Axe" ad slicks, only listing the title of the movie). However, Barmak did not apologize for the film's content -

People have taken offense at Santa being used in a scary context...Santa Claus is not a religious figure, he's a mythic character. I didn't deliberately ride roughshod over that sensitivity and I didn't anticipate the objection to it...The premise, God forgive me, struck me as funny. I thought it could really work with the right balance of humor and fright. Our target audience is teenagers over 17 and young adults who go to these pictures like they go on roller coasters. They aren't looking for a believable story; they go to be startled, to yell back at the screen.

The members of CAMM were inadvertently aided and abetted by statements made by the man who played the homicidal St. Nick, actor Robert Brian Wilson, who said he saw the role as "a job," and that the filmmakers "pushed the story out the door and replaced it with gore...I told friends and family with kids not to go see it."

Somehow the controversy continued long after the movie was absent from cinemas. A jubilant Eberhardt and Knowles continued to milk their 15 minutes with a mid-December appearance on Phil Donohue's syndicated talk show, even though the target of their wrath was a month-old memory. They threatened they reserved the right to keep CAMM in existence, so as to be vigilant for the next time Hollywood transgressed past their self-imposed boundaries of taste. Twenty-five years later, the organization has never re-surfaced. In Spring of 1986, an independent releasing company attempted to capitalize on the notoriety of the movie by altering the ad campaign, hyping the hullabaloo, and giving the picture a limited release in the South, but few were interested in seeing Santa Claus in April. SNDN found a true second wind through the home VHS market, generating enough rentals to warrant four additional sequels (the last one featuring - guess who? - Mickey Rooney) and a perennial mention when tastes turn to holiday horror. (The movie was never submitted for required certification in the UK, and never saw a British theatrical or home video release - until just this last month.) On a personal note, I've always viewed it as a matter of shame that Milwaukee was so instrumental in achieving an act of naked censorship. It was one thing to protest an ad campaign that was meant to air before mature, discerning audiences, but to go ahead and demand that Silent Night, Deadly Night be pulled from theaters where the audiences could be controlled and no one would be required to see something they did not wish to see...chilling. We should all take comfort in the fact that such an event has not happened since. Yet.

Merry Christmas from the Jar, Gentle Readers...and thanks for all your kindness and support.

Wow, what an amazing post Senski. Incredible. I always wanted to know more about this unfortunate series of events after having first heard about them on the documentary Going to Pieces: The Rise and Fall of the Slasher Film.

Thanks so much, PoT - and for all your support since I started this undertaking - it means a lot!

I vaguely recall some of the hullabaloo this film caused, but for some reason I kind of thought it was lumped in with Tipper Gore's obscene music lyric tirade of yore.

Sadly, I have never seen the original-off to Netflix I go.

Great post, Senski! The '80s sure were a reactionary era - which actually made it more exciting as a kid to follow 'corrupt' entertainment like horror or heavy metal. Now barely anything raises an eyebrow - even from the most conservative quarters. It makes you wonder what kind of reception films like Saw or Hostel would've gotten back in the day.

It wouldn't surprise me to learn that the efforts of Eberhardt and Knowles gave incentive to the PMRC, which really got their act together in 1985. While I don't have the mag in front of me, I remember reading the People with the question, "Has Music Gone Too Far?" on the cover in the Fall of '85. That same issue also had a review of A Nightmare on Elm Street 2: Freddy's Revenge. My brain is so strange that way - it connects media events in a way that establishes points in time pretty clearly. Why couldn't that talent have manifested itself in my becoming a brain surgeon?

For some reason I had thought that they had merely seen the poster, no idea that it was a commerical during a football game that marked the beginning of the end for SNDN! And thus the reason I love standup Horror Blogs like HiaJ!!

SNDN has always been my favorite S&E segment, it is all blown so far out of the water into ridiculous proportions. Im pretty sure it was the compelling script and character development that finally drew Mickey Rooney into the series.. Yes.. The script..