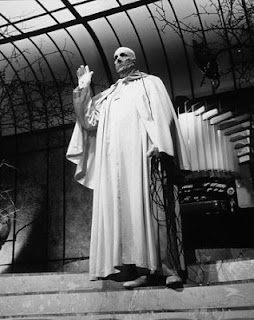 ...and I can hear some of you saying right now, it's about damn time.

Welcome to Heart in a Jar, a new blog dedicated to all that is, and has been, horrific, fantastic and speculative in the entertainment industry. Taking a cue from the writings of Mr. Robert "Psycho" Bloch, and his contemporaries like Richard Matheson, Ray Bradbury and Rod Serling, we'll be bouncing back and forth between the genres of Dark Fantasy and Science Fiction, with special attention to that lovely, nebulous region where the two collide, intersect, blur. Not for nothing did Serling christen his grand creation The Twilight Zone; we too will be residing in the middle ground between science and superstition, between the pit of Man's fears, and the summit of his knowledge. That gives us a lot of ground to cover, and that's just the way I like it.

My fascination with the weird, wild and woolly began as early as I can remember. Hitchcock was my Santa Claus. Vincent Price was the uncle I never had. While other boys covered their school notebooks with muscle cars and sports logos, I drew cyclopean nightmares that dwarfed skyscrapers, or multi-legged beasties that you wouldn't want to encounter in your cellar. Or attic. Or bedsheets. Comic books became a necessity, and I was grateful to be growing up in a time when horror and mystery titles outnumbered - and frequently outsold - their superhero counterparts. I learned to read at a ridiculously early age (thanks, Mom), and while classmates were perusing their Weekly Readers, I had the collected works of Edgar Allan Poe tucked under my arm. The local cinema got every monster movie the market would provide, and starting in 1967, I missed very, very few of them. Saturday afternoons were made for Creature Features, Wednesday nights for Night Gallery. I started collecting. And collecting. And collecting...

And so, Heart in a Jar. It's my hope to be, in addition to informative and opinionated (but not boorishly so), very personal as well. I'm doing this as a means of transcribing memory yet green, at a time in my life when I find myself reaching for items in the memory bank, only to close my hands upon air. I am researching my recollections. The little work I've done so far has been a blast.

But I've taken up far too much of your time and attention with this introduction, gentle reader. There will be many, many opportunities to reminisce and review in the days to come. For now, I'd like to hand things over to the keyboard stylings of one Dr. Anton Phibes, Biblical scholar, serial murderer and pipe organist extraordinaire. Let's enjoy some Mendelssohn as an overture.

It's so very nice of you to drop by.

You weren't thinking of leaving, were you?
Posted by senski at 6:56 PM

Thanks for the welcome and look forward to reading more of the Jar.

Newer Post Home
Subscribe to: Post Comments (Atom)
"I have the heart of a young boy...and I keep it in a jar on my desk." - Robert Bloch
"There are worse crimes than burning books. One of them is not reading them." - Ray Bradbury