When the noise dies down, when all the songs are sung...

February may be Women in Horror Month, but here at the Jar, we've contracted our yearly case of Oscar Fever, and so we'll be dedicating a number of posts to contributions to the world of Cinematic Horror that deserved at least a sideways glance from a certain golden gentleman with a sword and conspicuously absent of genitalia. And let's start things off with a song from, of all places, a slasher movie.

And not just any slasher movie, mind you, but one that got many a film critic's knickers in a twist when it hit theaters on May 15th, 1981. See, slashers are supposed to consist of a cast of passing-for-teen unknowns who fade into celluloid anonymity after they've been offed one at a time. Slashers are NOT supposed to feature such Hollywood luminaries as James Garner, Maureen Stapleton and, star among stars, Lauren Bacall. But that was the tony (and Tony'd) cast of The Fan, a not-inexpensive project that opened to critical catcalls and nonexistent box office. It was a gamble for Paramount, an attempt to bring older audiences into the cinemas by highlighting familiar faces (it was originally to have starred Elizabeth Taylor), while maintaining the younger demographic's interest through the grisly storyline of a psychotic stalker (a baby-faced Michael Biehn) who has Broadway icon Sally Ross (Bacall) in his obsessive cross-hairs. Unfortunately, they wound up enticing neither age group, and the movie left cinemas in a hurry. But that didn't stop critics from excoriating the trio of stars for "slumming." (I have to admit - it was really kinda tough for me to watch poor Maureen Stapleton getting threatened with a straight razor, but weeks later, the same critics didn't have any problem with the same scenario playing out against Angie Dickinson in Dressed to Kill. Pauline Kael was there to provide Brian DePalma with back-up, I guess.)

In transitioning from Taylor to Bacall, the creators decided to take advantage of the March 1981 Broadway opening of Kander & Ebb's musical adaptation of the 1942 classic film Woman of the Year, with Bacall in the role of Tess Harding (made famous by Katharine Hepburn). So while Bacall was singing up a storm night after night, she did so just 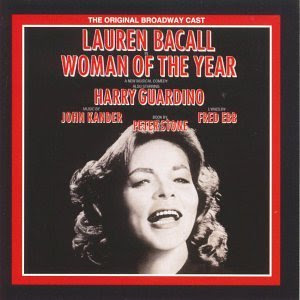 down street from a cinema where she was...singing up a storm night after night - for about a week or two, anyway. But don't feel too bad for Bacall. About the same time The Fan was exiting movie houses, she was taking the stage at the 1981 Tony Award and accepting her second trophy as Leading Actress in a Musical (the first being for 1970's Applause, the musical version of All About Eve, in which she played Margo Channing, another actress, replacing Bette Davis, who had also gone on to star on Broadway in....ok, I should stop now, right?)

What I do feel bad about is the treatment of "Hearts Not Diamonds," a lovely little song that appears in the final reel of The Fan, and the climactic number in the musical-within-a-movie, "Never Say Never." The music is from Marvin Hamlisch, who had, by 1981, won damn near every entertainment award that could possibly be humanly awarded (he is one of only two individuals to have received the Oscar, Tony, Emmy, Grammy and Pulitzer - the other being Richard Rodgers), and the lyrics are courtesy of Sir Tim Rice, who made himself a household name during the 70s with his collaborations with Andrew Lloyd Webber (Jesus Christ Superstar, Joseph and the Amazing Technicolor Dreamcoat, Evita). Gentle Jarheads, those guys don't come cheap.

Once the picture flopped, there was zero interest in any music from the film. To the best of my knowledge, there has never been a sheet music edition of this song (believe me, I've looked), and it has never been included in any Hamlisch or Rice collections of songs. Oscar voters do not traditionally look to Horror movies for Best Original Song nominees, and so it went unregarded by the Academy - but not the Razzies, who nominated it for Worst Song more in acknowledgement of The Fan's box office wipeout - either that, or the Razzies were trying to bolster their philistine credentials. While it all but certainly would have lost to "Arthur's Theme" that year, "Hearts Not Diamonds" had the pedigree to be an Oscar contender, and surely had every right to be there in the final five as much as "Endless Love" or "For Your Eyes Only." And to see Bacall sing onstage at the Dorothy Chandler Pavilion...Oscar, ya blew it.

Someday, someone is going to use this song to audition for a show I'm directing, and if they pull it off - they've got the part.

Oh I adore this film, I mean what's not love about it? The camp value is through the roof, the acting is over the top, and Lauren Bacall is the final girl!

Need to check this one out. Sounds great.

Is the 90's film with De Niro and Snipes a remake?

The DeNiro film is a whole other ball game (yuk yuk). The original film is based on a pretty good novel in which the entire story is told via letters, press clippings, police reports and diary entries. I don't know if it's still out there, but It was a great read.

The De Niro / Snipes movie is a guilty pleasure of mine. The over-the-top direction by Tony Scott, working in his usual testosteronal mode, is a gas; he's clearly someone who doesn't know a damn thing about baseball, and doesn't care. He just wants the picture to look ballsy (sorry) and slick. And De Niro is always watchable in a trashy booga-booga role. "Bobby, Bobby, Bobby..." On a hot summer afternoon, it was a stupid but fun time-waster.

Great post, Senski! I almost picked up this DVD a few years ago but let it go. I haven't seen the film since it was on HBO back in the day but judging by this clip, I ought to make a fresh effort to catch up with it! There's something about big stars 'slumming' in horror films that I find irresistible.