Over at Dinner With Max Jenke, Jeff Allard has posted a thought-provoking essay about the YouTube-ization of Horror. Given the ready access to scenes and snippets from the great - and not so great - horror movies and shows of the past, what effect is it having upon young viewers and future consumers of the genre? And what effect is it having upon the genre itself? This got me thinking about the great Horror Boom of the 1970s, and what were the conditions that existed that created lifetime fans of those who grew up in the years before those Days of Gory Glory? It's tempting to fall into the trap of solipsism ("Well, this is how it was for me, and therefore how it should be for everyone"), but there was one particular quality to the Horror of that time - and I'm targeting the late 60s and early 70s - that is absolutely non-existent today. It had nothing to do with content, but everything to do with form.

If you were exposed to Horror, chances are that it was in a Short Form - that is, short story collections, tales in comic books, and anthologies both on TV and in the cinemas. These were the days prior to the success of novels like The Exorcist and Carrie, and before the continuing character TV series like Kolchak: The Night Stalker, The X-Files and Friday the 13th: The Series. You got to figuratively dip a toe in the water of terror, test your endurance, and then decide if Fear was the emotion for you. Unless you went to your local theater for a movie, the films you were exposed to were on commercial TV, edited for content, but more importantly interrupted by advertising every 10-14 minutes or so. Your Horror came to you in small doses, so that by the mid 70s, you were old enough and tested enough to seek out stronger, longer stuff...and both Hollywood and the publishing industry complied, both enjoying the kind of halcyon days that have never quite re-appeared since. And, as it's easier to suspend disbelief for a shorter period of time, these efforts were frequently, chillingly successful.

So exactly how omnipresent was this Short Form Horror? Let's look at it medium by medium...

FILM - The early 70s saw the culmination of a long stretch of anthology films, primarily popularized by the filmmakers at the UK's Amicus Studios, but with occasional offerings from others. From 1962 to 1975, audiences turned many of the following movies into major box office hits:

Tales of Terror, Twice Told Tales, Black Sabbath, Dr. Terror's House of Horrors, Asylum, The House That Dripped Blood, From Beyond the Grave, Tales from the Crypt, Tales That Witness Madness, Torture Garden, The Vault of Horror

And these movies, thanks to their episodic nature, lent themselves nicely to commercial breaks when televised on the late, late show. (Once author Robert Bloch became a household name due to Psycho, producers sought out his considerable back catalog of short stories, which formed the basis of many of these movies.) We've seen the occasional anthology movie since - most likely based on Stephen King short stories - but nothing like the proliferation of this era.

TELEVISION - Anthologies were the very foundation of TV's early days, with original live dramas bringing class and credence to the new medium. Eventually these became some of TV's most storied (no pun intended) series:

When they were not televised as first-run shows, they were staples of local syndication. This format continued into the 1980s with shows like Tales from the Darkside, Monsters, The Hitchhiker, Ray Bradbury Theater, Roald Dahl's Tales of the Unexpected and Tales from the Crypt. But with a paltry few exceptions, anthology shows have all but disappeared over the last 20 years.

It should also be noted that made-for-TV movies, especially from ABC, became the de facto Playhouse 90 of their era, with such watershed films as The Night Stalker, Duel, Don't Be Afraid of the Dark, Trilogy of Terror, and dozens of other lesser examples. Seldom did a week go by in the early 70s that one of the three major networks did not show an original movie that had its roots in Horror, Suspense, SF or some combination of the genres.

COMIC BOOKS - It may seem difficult to believe today, but Horror anthology titles routinely outsold books featuring Superman, Batman, and The Fantastic Four. After the shooting star that was EC in the early 50s, Horror titles skulked around the fringes of comicdom, taking a back seat to SF collections offered by the major publishers. But thanks to the efforts of people like publisher Jim Warren and editor Joe Orlando, Horror made a comeback in a BIG way, so that, by the early 70s, here are all the titles that were available from the various publishers (and I'm sure to be forgetting some):

Marvel - Journey Into Mystery, Chamber of Chills, Where Monsters Dwell, Where Creatures Roam, Monsters on the Prowl, Creatures on the Loose, Fear, Uncanny Tales From Beyond the Grave, Crypt of Shadows, Dead of Night, Vault of Evil, Beware!, Weird Wonder Tales, Supernatural Thrillers (plus late 60s titles Tower of Shadows and Chamber of Darkness)

Add a variety of smaller publishers and less-accomplished magazines (please don't make me go into Witch's Tales and its ilk), and you can see how much space on the newsstand Horror anthology comics occupied during this time.

BOOKS - Before there were novels, there were anthologies. Kids were raised on collections "edited" by Alfred Hitchcock (Monster Museum, Ghostly Gallery, 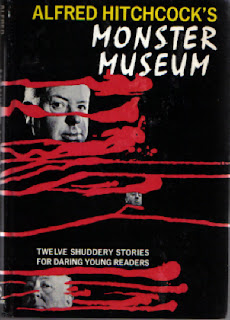 and many others) and Boris Karloff (Tales of the Frightened), and then graduated to omnibus volumes from Peter Haining, Groff Conklin, Damon Knight, Joan Aiken, Hugh Lamb, Vic Ghidalia, Roger Elwood and many other master anthologists. (The back pages of Warren Magazines were filled with ads for book after book of short story collections.) If you had a particularly continental bookseller, you may have been able to pick up copies in the UK's once-venerable Pan Book of Horror series, or Tales of Unease. Even the lowliest drugstore's paperback rack would feature a half-dozen Horror collections on any given day in the early 70s. Authors like King, Koontz, Saul, Herbert and Farris would eventually appease the new demand, but for years, these anthologies were Horror.

So, while we'll certainly never see a return to those days of Short Form Horror, I wonder - are the kids who are getting their kicks from YouTube terror hankering for something that's simply...shorter?

I think horror stories thrive on the short form in just about any medium.
It's easier to keep up the concentrated mood for the the length of a few pages than it is over an entire book/film.
Most of the famous horror authors that pop to mind... Poe, Lovecraft, Ligotti, Machen, Barker... even Stephen King... have a large body of short fiction... and, for me, that's where most of their best scares have come from.

Also, One medium you didn't mention, because it's heyday precedes the era you were referring to is radio... but at one time was also full of horror anthology shows such as Lights Out, The Hermit's Cave, Dark Fantasy, The Weird Circle...

There's been so much short horror on order up till now that I kind of wonder why it's gone out of fashion.. or is it just a lull?
The recent movie 'Trick or Treat' certainly seemed to be get a lot of word of mouth.

Certainly a thought provoking question for the modern age.. I always question myself when I post video clips for Great Moments in Horror because I hate to cheapen the effect of awesome scenes when taken out of the context of their original films and thereby ruining some of the fun of new Horror fans first viewings. But then, YouTube does resurrect many clips and trailers that have long fallen into obscurity.

The closest modern attempts at the short Horror dose still came at over 40m in the form of the Masters of Horror series, but I would love to see a revival of the Amicus anthologies and Horror comics!

I've long thought that HBO is overdue for another horror anthology show (like reviving the Night Gallery franchise, or Tales from the Darkside, but with real $$$ behind it). The Pan Book of Horror is being revived later this year. I wish that Vertigo could figure out a horror anthology comic. Later I'll do a post about Flinch, their short-lived attempt at one of about a decade ago. I'd be happy just to see some - any - efforts in these directions.

Thanks for the shout-out, Senski! As for short-form horror, I do believe it's an essential part of introducing fans to the genre. One of the most influential books I read as a kid was a short story collection called Tales of the Frightened. I'm sure most of those stories - intended for a younger audience - wouldn't hold up in the slightest now but when I first encountered them, the effect they had on me was electric.

I continue to love short-form horror - whenever someone attempts a new anthology program, I'm always there to give it a shot. One of these days, I hope they can make a hit out of one again.