To Elm and Back 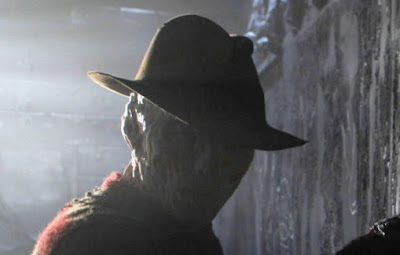 Okay, let me get my Freddy Krueger heresy out of the way and up front; I hate the majority of Elm Street movies. Despise them. Loathe them with a white-hot intensity usually only reserved for certain odious people and things connected with the Red States. In the alternate dimension that is SenskiLand (Population: One), I hold only a handful of Freddy productions as Krueger Canon: the first two films, Craven's wonderful deconstructed 1994 follow-up, and, when pressed, I'll throw in the comic book slug-fest that had Freddy exchanging blows with a certain hockey-masked, machete-wielding hulk, if for no other reason than the damn thing was just so much giddy fun. (Bonus - Toss in the two Steve Gerber-scripted issues of Marvel's B&W NOES magazine, which perfectly captured a perverse, surreal vibe that was serious and wickedly off the wall.) But from Dream Warriors on, I felt as a kindred soul to Craven, his heart sinking ever deeper into his bowels as he watched his imaginative creation morph into a cackling Borscht Belt harlequin, his killings becoming more and more absurd, his horrid burned visage softened to a palatable plastic fright mask -- and New Line Cinema laughed all the way to the bank. As each new entry rocketed to the #1 position on opening weekend (and dropped off just as quickly), the series created a new, lowball standard for Horror; outlandish kills, punctuated by rimshot one-liners. (Dr. Giggles, anyone? Or any Chucky movie after Child's Play?) Craven's original remains one of the most frightening movies ever made, with well-developed teen characters offed in ghastly ways, their deaths leaving a wound in audiences' hearts. And as flawed as the first cheap quickie sequel may be, the gay coming-out subtext remains bold 25 years later, and "You are all my children now" is one of the most chilling moments of the entire franchise. But after that? Freddy, you're dead to me. You're one of the biggest reasons Horror needed to be resuscitated in the mid 90s.

So a new Elm Street that promises to play it as serious as a nightmare-induced heart attack is unspooling to a receptive viewer in Yours Truly. But despite a positive frame of mind and expectations suitably lowered by a plethora of advance buzz ranging from the merely mediocre to the godawful, I have to report that the most grievous sin committed by this new Nightmare is that of being utterly unnecessary. It does not re-imagine, it does not re-boot. It goes through the motions, with Horror substituted by a series of jolts - reinforced by the ever-present Surround Sound stings - and takes much of the original - albeit with one important plot deviation - and replaces its Reagan-era synth and neon sheen with a grittier, under-lit, under-fed approach (most of Freddy's victims are corpse-like before they ever merit the designation) that, truth be told, will appear just as dated a quarter-century from now as the original may seem today. It's not as awful as the nay-sayers are painting it to be - the production values are too high - but it's just...there. It's designed to open at #1 to non-discriminating crowds. And yes, as I write this, it has done just that.

Since I doubt I need re-create the backstory for readers of this blog, suffice it to say that Krueger is once again slaying teenagers in their sleep, and like the old wives' tale about dreams of falling and the necessity of waking before you hit the ground, Dead in Freddyland equals Dead in the Real World. The difference here is his motivation. Whereas Krueger84 was killing kids as a means of exacting revenge on the parents who burned him to death for murdering children, Krueger2010 may be a child molester, condemned by the testimony of preschoolers where he worked as a gardener (shades of the McMartin School case of the late 80s). Note that I say "may" be, as the movie keeps the issue ambiguous for a not-long-enough 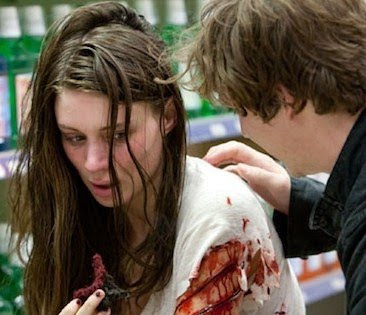 period (it ultimately provides an answer, but a gutsier approach would have been to keep it open-ended - Freddy wound up becoming an anti-hero through his sequel shenanigans, but it would have been a bold and controversial move to leave the matter hanging). So sixteen teens are on Freddy's "To Do" list, and as the movie opens, there aren't many left to cross off. It's best not to ask yourself how that many kids could simultaneously suppress a memory a little more than a decade old, but if you're in for the pound of a man who kills you in your dreams, you're in for this penny too, I guess. A good many beats and images are lifted directly from the original film, including one too many trips to the "Freddy's glove makes sparks" well. There's also a moment recreated from the finale of the 84 version, with the aid of a well-placed mirror. That it happens to the worst performer in the film brought a smile of schadenfreude to my face. 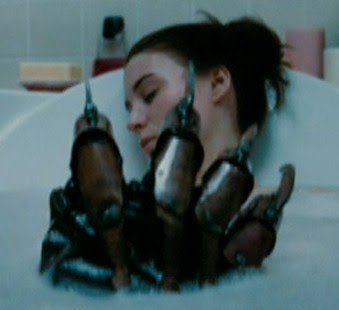 The teens are a sullen and pasty lot, their personae pretty much interchangeable. I was longing for some John Hughes archetypes to at least give these young actors some dramatic meat to chew on; Kyle Gallner, Rooney Mara and Thomas Dekker are giving their all, and Gallner more than most, having to play an important scene incongruously dressed in nothing more than a Speedo. (Note to all Twilight freaks looking for their Kellan Lutz fix - Don't spend too much time giggling, texting and dawdling in the lobby, or you'll miss what you came for, 'kay?) So naturally my attention - and concern - turns to Jackie Earle Haley, inheritor of the fedora and the knife-fingered glove. He's given the unenviable task of finding a voice for Freddy that is both noticeably different from Robert Englund's, as well as his own throaty rumblings as Watchmen's Rorschach. I'd say he largely succeeds, by dint of the fact that this is a not very talkative Freddy, and the mordant wit that spiraled out of control in the latter films is mostly kept in check here.* He's a slight figure, but precisely the type that would requires the element of surprise to physically overcome his prey. But the make-up...eh. It fails on two counts: it's not expressive enough to allow an actor's emotions easy egress, and it's not unsettling enough to make an audience dread 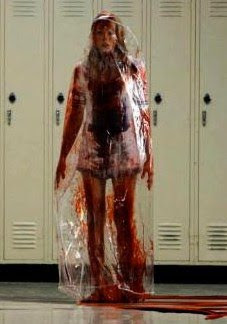 seeing it each time it's onscreen. Back in 1988 I was mildly traumatized by the work done on Richard Lynch in Bad Dreams (accused of being a simple Elm Street rip-off at the time, but much better than that). Gobbets of flesh hanging from the skull, exposed cutaneous fat, one eye cooked to opaqueness - now THAT was a burn victim, and I flinched every time he appeared. Much was made of the claim that this new Freddy is based on that of real casualties. Trust me - they could have found inspiration that was far worse. Haley would have been aided in his performance, and New Line would have had a REAL reason to keep Freddy's face under wraps.

That would have involved risk, and Platinum Dunes' approach does not allow for risk. That approach is about getting into theaters and grabbing a big Friday opening before the film can be Tweeted to death. While I suspect that a good many disgruntled ticket-buyers feel that way because they miss the jokey, anything-goes approach of the late 80s, those of us looking for that sense of accumulating dread that Freddy was birthed in are sure to be just as disappointed. So when the next re-vamp rolls around in 26 years (I'll be 73, and they'll just plug it directly into my cerebral cortex), may it be in the hands of filmmakers brave enough to charter a new route to a familiar street.

But bring back the old crimson, flickering New Line logo. That would have been cool.

* We see scenes of a pre-burn Krueger playing with the schoolkids. A revolutionary stroke would have been for him to keep that same relationship with the children-now-teens, and reflected in the dialogue. "Want to see something pretty that I have for you, Nancy?" Delivered without irony, it would have been profoundly different - and very unnerving.

Wow, this one is really taking a pouncing. Glad I stayed away.

This movie was simply uninspired and anti-climactic. Everything could be called from a mile away. A film that should simply not have been.

A shame considering a lot of original indie fare is falling by the wayside while stuff like this continues to make a pretty dime.

Yeah, Pax - I saw a Sunday matinee with only 7 other people in the audience. For it to still make $32 million, that drop-off is catastrophic. The word is out, and it's toxic.

And PoT - it just saddens me to think of much better movies like Drag Me to Hell or Orphan, that struggled to make 1/3 of what NOES did this weekend. Good, bad or rancid - if it's something with a recognizable name, the horrorheads come out in droves. Give them something new and unfamiliar, and they need to be herded with cattle prods. And you're right - indie stuff? No chance in hell.

The film made 15 million its first day. the word of mouth is so bad on this one that it REALLY dropped off the following two. It'll be lucky to clear * million next weekend.

Funny that they're talking about a sequel to this when they it was just announced that a Friday the 13th Part 2 wouldn't be happening. That wasn't well-loved either but it made far more at the box office than this new Elm St. ever will. I have a feeling plans for the Elm St. sequel will never go past the talking stage. Shame about what a botched job this was - it could've been a great reboot, if handled correctly.

Spot on as always Senski and thanks so much for mentioning Richard Lynch's make-up and performance in the underrated Bad Dreams. You're right, If they had aprroached the design and character more along those lines they would have faired much better. Funny to think Bad Dreams is over 2 decades old and the makeup was vastly superior to NOES 2010 in every way.-Unk

Thanks, kind gents. And thanks for coming back to The Jar after I was having my existential crisis...which NOES didn't exactly cure...:-)

Fantastic review - and without spoilers. Impressive.

While I don't share your taste in the franchise - 3:Dream Warriors was excellent - I do with this reboot.

Thanks, A. Jaye. I freely admit that I would feel much more kindly toward Dream Warriors if it hadn't marked such a seismic shift in the approach to the character. Chuck Russell is a fine director, and I am absolutely head over heels with his take on The Blob just one year later.

I was dubious about Bayer's direction going into this. He directs what many consider to be THE video to THE song of the 90s, and it takes him two decades to helm a major feature? Odd...

Was planning on hitting the theaters this weekend, but unless I sneak in to see it after IRON MAN 2, I think I am going to be intentionally missing ol Freddy this round