Look Out, Stomach - Here He Comes 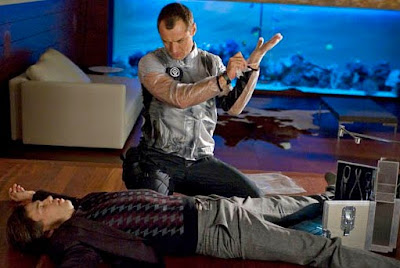 When that great, all-encompassing History of the Cinema is written someday in the far future, Repo Men's best hope at achieving anything greater than asterisk status probably hinges upon the unusual synchronicity of its opening date, occurring as it has on the very weekend that the US Congress passed the most comprehensive health reform legislation in many a generation. To the dismay of many progressives - myself included - that legislation did not contain a public option designed primarily to contain costs. Had Repo Men been a more effective film, it could have served as an argument for the necessity of such an option, or at the very least, a broadside against the notion of allowing the private sector to provide health care because, by cracky, everything would just be ever so much better if only that gosh-darn gummermint would get out the way. In Repo's future, corporations produce million dollar "forgs" - artificial hearts and mechanized livers, paid for on the installment plan, and if you can't make the payments (and most can't) ...let's just say that the repossession takes the term "invasive procedure" to a new extreme.

But movies aren't at their best while preaching, and neither are film critics, for that matter. and infrequent enlightenment are what is required, and Repo Men is only fitfully successful at either. I went into the theater wondering what kind of film was in store for me, and apparently the filmmakers made it all the way to final cut without answering that question for themselves, either. Within the first few minutes, we witness repossessor Remy (Jude Law) extract a liver from a non-payer, and as he gropes about the innards looking for the device, the soundtrack inexplicably plays Rosemary Clooney's "Sway," perhaps a tip of the hat to the source novel's title. So it appears that our hopefully-paid-for tongue will be planted in the cheek, and the humor will be served up bile black. 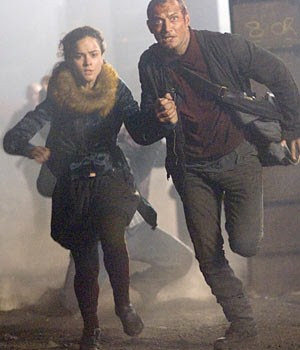 But soon we get sequences of family life played with a sullen earnestness, Marco Beltrami's score dripping with sonority. Have we shifted from satire to domestic drama? And what about later, as bullets fly and knives are drawn? Action thriller? The dialogue is leaden and perfunctory, offering nary a clue. Hey, Movie - pick a vision and run with it, ok? This spastic shifting of tone may be manageable in the hands of an experienced helmer, but under the neophyte guidance of director Sapochnik, it plays like Wisconsin weather. Wait five minutes, and...

There's hope for some sorting out at the half-hour point, when Law has an on-the-job accident that renders him a client, complete with seven figures worth of beating within his chest. While the plot finds a direction, it's a familiar one, and the movie scarcely bothers ticking away the requisite 96 days before the conglomerate that is The Union will be wanting their hardware back. By that time, Law is a homeless derelict, shacking up with almost-cyborg Alice Braga (displaying little of the presence of her aunt Sonia) and avoiding erstwhile partner and longtime friend Forest Whitaker, demonstrating that a Best Actor Oscar plus three years combine for questionable worth these days. Law has also discovered an empathy with the poor bastards he's harvested over the years, and has developed a new-found appreciation for the gift of life -- that goes right out the window once Repo Men enters "impregnable fortress" mode, and he's slicing and dicing his way through hordes of henchmen with alacrity and aplomb. But, hey, you know what they say about a foolish consistency.

And yet...there are moments. The scene of a nine-year old girl adept at forg maintenance gives us a taste of what Repo Men could have been with a dollop of mordant wit, or if its creators had given a pensive moment to consider some of its glaring plotholes (The Union manages to keep the unpleasant nature of its collection practices a secret while there are veritable Hoovervilles of the destitute and delinquent? Really?). I had hoped that the casting of Law was hinting at Brit acidity in store, reminiscent of , but no such luck, as he's called to play few emotions beyond morose and bereft. Many are taking issue with Repo Men for, uh, borrowing elements from the earlier film Repo! The Genetic Opera, but the meme of involuntary organ donation has been kicking around SF literature for about four decades now; check out Robert Silverberg's classic short story "Caught in the Organ Draft" for one of the earlier examples. And if Repo Men had borrowed from an earlier film, I wish it had picked Logan's Run for its con brio pacing, or at least its color scheme*. Time spent with Repo Men would be better shared with a good book, or with the family. As The Union reminds us at every opportunity - You owe it to your family. You owe it to yourself. 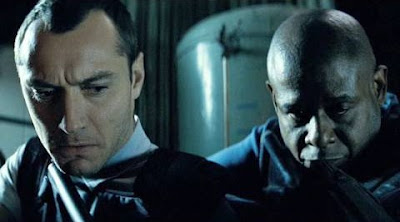 * - Are you like me? Do love the Movies? Then read this eye-opening post from Todd Miro's blog Into the Abyss, about the predominance of the hideous "teal and orange" color scheme that has infected movie-making like a mutant strain of penicillin-resistant syphilis. Repo Men is yet another victim of this insidious disease, which shows no sign of abating anytime soon. Lord almighty, whatever happened to Technicolor?

You had me at " it plays like Wisconsin weather..." That said, I'll wait until this mess hits cable.

Hey, I wasn't "taking issue", I was simply saying that Anthony Stewart Head singing and slicing people open was in fact more hilarious than anything in Repo Men.

Hobbes, I wasn't referring to you - there has been a LOT of bitching on the Horror blogs about the similarities. Far be it from me to imply that the world can't have two "organ re-possession" movies.

Pax, I had considered "New Jersey weather," but then I don't know squat about NJ weather, other than you seem to have gotten a shitload more of snow than we did here, and I for one am chartreuse with envy.