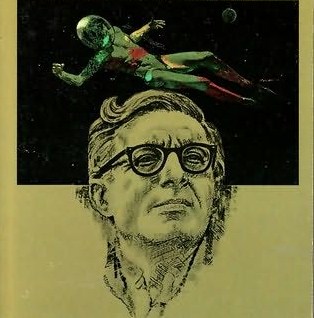 When I first discovered the literature of Bradbury, and the American space program all but assured us humanity would soon slip the surly bonds of Earth and touch the face of tomorrow, the Red Planet seemed accessible, beckoning, inevitable. As a child of the 1920s, Bradbury looked up at the Waukegan skies and dreamed; as a child of the 1970s, my generation looked up at the skies and knew we would realize those dreams for him, and soon.

We were so very wrong. How it must have pained the boy inside Bradbury the man.

What small steps of discovery we did make showed us the poetry of Bradbury was very far removed from the real thing (although the semblance of a face in the Martian soil made us conjecture for years on end). He was unconcerned with the physics of rocketry or the biology of survival (his Mars had air), preferring instead to use the eerie Martian landscape as a backdrop for tales of our foibles and fragility. When pressed, he would confess to having written only one work of true science fiction (Fahrenheit 451), the rest being tales of science fantasy. Or suspense. Or dark, dark horror. Or…Bradbury had only to look around his cluttered office to find inspiration on every shelf, and he seldom suffered a block. My very first Bradbury was “The Trunk Lady,” a rarely anthologized tale - he wrote over 600 – that would not be out of place within the pages of Alfred Hitchcock’s Mystery Magazine; his love of the pulps remained with him till death. In 1972 our school was having its yearly book fair, and I always gravitated to the titles that promised black wonderment. I delightedly ordered my copy of Horror Times Ten, edited by Alden H. Norton, with the aforementioned story, also laden with tales by Derleth, Lovecraft, Bloch and others. This in turn led me to the Bradbury of The October Country, with its simple-titled stories of subtle-yet-nightmarish unease and unsettling metaphor. I have given copies of this book as gifts to more friends than I can possibly number, often in time for Halloween (an earlier version - Dark Carnival - was published in 1947 by Wisconsin's Arkham House, Bradbury's first book). With stories like “The Small Assassin,” “The Crowd,” The Wind” and especially “The Jar,” it is my single favorite collection of dark fantasy. For those who know the man as only a creator of futuristic visions, the stories spawned by his childhood night terrors are a revelation. The reader can  sense Bradbury working over the noun of every story title in his mind, maneuvering it to dark alleyways or neglected corners where so-called serious writers of the time dared not tread, and always to its shattering but understated conclusion. 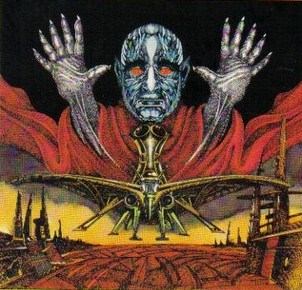 From there it was a leap into the heavens with The Golden Apples of the Sun, R Is for Rocket, S Is for Space, A Medicine for Melancholy, and his magnificent collection of outré tales from other authors, Timeless Stories for Today and Tomorrow. I would also learn that EC Comics had adapted several of his stories for their short-lived horror and SF titles…as did he, picking up an issue and surprised at finding one of his stories. This prompted a gentle letter to editor William Gaines that their rendition was very flattering but, you know, they really should have asked for his permission, as he would have been happy to give it. (In later years he would be more protective of his ideas, as his anger at Michael Moore for borrowing his title as inspiration for “Fahrenheit 9/11” would demonstrate.) He became a household name; people in the 60s who did not know or care for genre fiction knew of Bradbury. 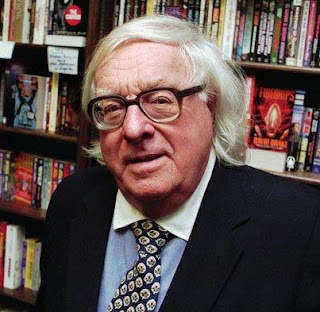 He made us nostalgic for the future, if such a thing is possible. Above all, Bradbury understood what it was to come from a small town in mid-America and appreciate its slower pace of life, and – paradoxically for a man interested in the future – caution against the ravages of dehumanizing technology run rampant (he despised computers and the internet). And yet, he saw humanity on the surface of Mars as a kind of bold frontier, exploring the unknown with the tools at our disposal, ever mindful that flesh and blood and red sand can mix to produce powerful metaphors of racism, intolerance and greed. And there is no technology, now or in the future, on Earth or on Mars, that can save us from those.

Mars is waiting for us. Sadly, Ray Bradbury could not. I hope he finally understand its mysteries.

(For my earlier account of his immortal short story "The October Game,"  please click here.)
Posted by senski at 7:08 PM

WOW... really gonna miss your unique perspective and humor. Please consider posting info on how to download the e-version of your novel.
Thank for sharing with us.
Domain reseller
cheapest domain reseller

Dave it has always been pleasant reading what you wrote here and expressed with freedom. We look ahead to your posts.
Kızlık zarı
Genital estetik

The adequate account is that the G-Buss all-around business agenda works with around any adequate or service.
Yüz Germe

Sorry to see you go. It's been a good ride.
travesti

I wanted to thank you for this special read. I definitely savored every little bit of it and I have you bookmarked to check out new stuff you post....
Estetik

Found your blog via Bloody Disgusting’s Horror Blog Awards. – Congrats! So far they have been right on the money. I’m really enjoying your blog so far and will definitely be visiting more. –good work and thanks for sharing your horror love!

Awesome, this was a absolutely superior post. In approach I'd like to address like this too - demography time and absolute accomplishment to accomplish a acceptable article... but what can I say... I adjourn alot and never assume to get something done.
toddler costume

Good efforts. All the best for future posts. I have bookmarked you. Well done. I read and like this post. Thanks.ipcamera in bhubaneswar

Older Post Home
Subscribe to: Post Comments (Atom)
"I have the heart of a young boy...and I keep it in a jar on my desk." - Robert Bloch
"There are worse crimes than burning books. One of them is not reading them." - Ray Bradbury