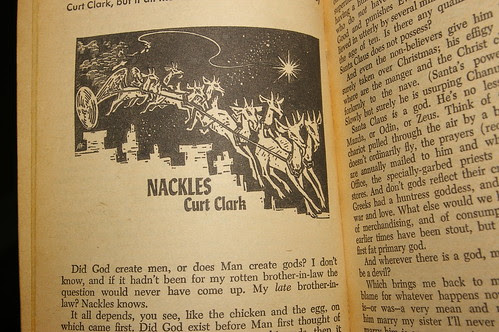 On December 20, 1985, viewers who tuned in to CBS' re-boot of Rod Serling's Twilight Zone were treated to a special Christmas installment of the series - or two-thirds of the hour, anyway. Three stories were slotted that night. The first was a re-working of Serling's 1960's teleplay for the orginal series' second season holiday episode "Night of the Meek," in which Art Carney played a down-on-his-luck schlub who comes upon a magical bag that's the source of every human wish (in the new version, Richard Mulligan played the ersatz Santa). The last was a simple yet profound staging of Arthur C. Clarke's immortal short

story "The Star," in which Fritz Weaver (under the moody direction of The Outer Limits' Gerd Oswald) portrays a Catholic priest in space, his faith rocked when he discovers that the Bethlehem star was in actuality a supernova that claimed untold billions of extraterrestrial lives. The story in the middle did not have a Christmas theme, however. It was "But Can She Type?," in which Pam Dawber was a harried secretary transported to an alternate reality in which secretaries are exalted and bosses are the peons. It was a light-hearted bagatelle of a comedic piece, nothing more. It was also a substitution for what producers had originally intended to go in that slot...and what was supposed to have aired in those minutes was anything but light-hearted. It was meant to be another Christmas-themed tale entitled "Nackles," and the story of how that teleplay (which assuredly would have become an unforgettable installment of the show) got axed at the last minute made for major media coverage at the time, and the loss of a valuable creative asset to the series.

When CBS announced that would be returning to its prime time schedule after an absence of almost two decades - and ten years after the death of creator Serling - there were two components to that announcement that filled fans with great hope that the series would be handled right. First was the decision to canvass the history of horror, fantasy and science fiction

literature to find worthwhile tales - if not classics - to adapt for the small screen. Spearheading this effort would be a master fantasist and a fanboy of the first order - Harlan Ellison. The award-winning author surely possessed the ability to rattle off a list of several seasons' worth of exemplary tales - with more than a few of them coming from his own bibliography. And while the show produced a number of noteworthy original tales, it also provided a home for masterworks by Ray Bradbury, Robert Silverberg, Theodore Sturgeon, Robert MacCammon, Henry Slesar, Stephen King and yes, Ellison himself. From all observations, the series appeared to be in the very best of hands.

Ellison has said that the year he spent with the series was one of the most enjoyable of his professional career, and, working with producer Philip DeGuere and story editor Rockne O'Bannon, the team had to feel like the proverbial sweet-toothed kids in a candy store; the hour-long format enabled stories to take the airtime that they required, rather than having one tale either stretched or cut to fit a half- or full-hour format. Yet Ellison was a frequent complainer about one element of the show - the directors. Good-naturedly tired of listening to the author kvetch about the camerawork that was being turned in, DeGuere decided to make Ellison put his money where his considerable mouth was, and direct a story for the series.

Ellison was already at work adapting 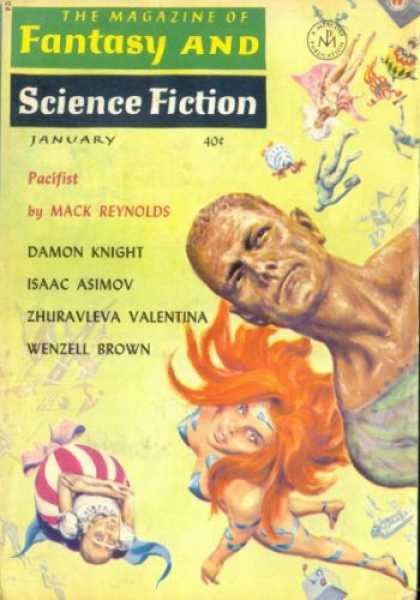 Donald (The Stepfather) Westlake's short story "Nackles" (which you can read here.) The tale, originally published under Westlake's sci-fi pseudonym Curt Clark in the January 1964 issue of The Magazine of Fantasy and Science Fiction, told of a mean-spirited and abusive husband and father who crafts the tale of an Anti-Santa as a means of keeping his unloved children in line. Dubbing the evil character Nackles, he creates a horrific figure who prowls under the crust of the Earth, powered by a team of eight dead-white goats, looking for children to abduct and eat. (I'll let you read the story for yourself to see how it turns out, gentle reader.) Ellison took the kernel of that idea and wrote a new story around it. In it, a bigoted slumlord conjures up the Nackles myth as a means of striking fear into the hearts of the African-American children who live in his tenements. But Ellison took it a few steps further. He had his slumlord tell the kids that Nackles only came for "ni***r" childen, and that the real Santa would pass them by. (Ellison also added the nasty embellishment of making the goats blind, their eyes sealed shut. After all, who needs to see underneath the ground?) And the final, finishing touch? Nackles was black, as well. It was all very powerful, in-your-face stuff for an eleven minute teleplay...and it was very Ellison.

CBS Standards and Practices got ahold of Ellison's script, and to say they balked would be putting it mildly. They were put off buy many things, but none more so than the notion of a black Anti-Santa. The network wasn't ameliorated by the notion that Nackles was the instrument of a bigot's comeuppance; they only heard the expected angry phone calls and envisioned the mountain of

letters and telegrams. To pacify his objectors, Ellison reworked the reveal of Nackles to make him appear as a variety of minorities in a number of quick cuts, for the more important element was that a prejudiced bad guy receive his just desserts. The author thought the conflict resolved and went into pre-production, perfectly casting Ed Asner as the slumlord.

They were only days, even hours from shooting, when the network struck again, and this time, there was no middle ground - they were pulling the plug on the production. A stunned Ellison threatened to walk away from the show, CBS called his bluff, and, in Variety parlance, he ankled. It was a lead story in the news section of TV Guide, and even made a number of national papers, but the angle on it was not flattering to Ellison. He had crafted a story that featured an evil black Santa, and the fact that the character was there to deliver a reckoning got lost in some of the coverage. Those who rejoiced at Ellison's role with the series were crestfallen but unsurprised, as the prickly writer had a legendary

reputation for contrary behavior, and I know that I was wondering how long he would be able to keep his temper in check. (I was glad at the time to learn that it was a contretemps concerning the network and not his co-workers, and in the DVD commentary for the first season, Ellison certainly sounds like a man who was enjoying coming to work every day.) His side of the incident - as well as his teleplay, revisions, and Westlake's story - can be found in his 1998 collection Slippage. This marked the second time in the space of a year that a major media outlet grew skittish at the concept of a Santa Claus who was not all mercy and sweetness and goodness and light, but, unlike the movie Silent Night, Deadly Night, "Nackles" was unable to be preserved in any format other than typing paper.

Great topic, Senski! I just recently got into the '80s TZ, having totally ignored it for many years. I never watched it back when it originally aired and never heard enough about it to make a point of catching up with it. But when my wife discovered that an episode that had terrified her as a kid "The Shadow Man" was from the new TZ (instead of Tales from the Darkside, like she'd believed), we Netflixed a disc and really liked what we saw. When SyFy ran a marathon not long after, we watched it and for the most part loved all the episodes we saw. It's a shame that Ellison's episode never came to be and that he had to leave the show but for at least a season, the new TZ did a good job of carrying the torch of Serling's legacy.

Thanks, Jeff! I have many fond memories of the series, even personal and professional ones, as I came very close to getting work produced in the second season - but then CBS canceled it, and when it switched to Canada for the syndicated third, they had all the teleplays they wanted from US writers. But that's all another story for another post...:-)

Steve, this is a wonderfully entertaining "behind the scenes" look at a part of our shared tv heritage that until reading your post, I was totally unaware of. I do like a lot of Ellison, and would have loved to have seen his adaptation of Westlake's Nackles...
It's always the "suits".... always.
best,
r/e

I remember hearing about this episode back right after it did not air. Back then The Twilight Zone magazine was still coming out every other month and they had a special section devoted to it. It i ncluded an article called The Nackles Affair which explained how and why the episode came to not air, the screenplay of the episode, and lastly it had a copy of the original tale. I had always wished it ran, but reading about it certainly intrigued me at the time.

"Nackles" is not in Slippage. "Crazy As A Soup Sandwich" is. The former is likely to stay in the late Mr. Ellison's files and never see the light of day unless Joe Straxynski can talk CBS/Paramount into unclutching its panties.

I sit corrected. The "Nackles" script did appear in a LIMITED edition of Slippage published by Marc Ziesing. Also, my apologies to Mr. Straczynski for butchering the spelling of his name.